Can a HOA prohibit firearms in Common Areas?

The Board does have the authority to prohibit firearms in common areas so long as proper notice of the prohibition is posted. Arizona law provides that firearms can be prohibited on private property or a private establishment (e.g. common areas) where the owner or any other person having lawful control over the property has given reasonable notice that the carrying of deadly weapons or firearms is prohibited. Arizona law does not provide guidelines on what constitutes “reasonable notice”. However, we can look to the posting requirements for establishments that sell liquor (e.g. bars and restaurants) for guidance. A.R.S. § 4-229 requires that a notice prohibiting firearms in an establishment with a liquor license must meet the following criteria:

As such, we would recommend that (1) the notices/signage be conspicuously posted (and if it’s a large area, you may want to consider multiple signs), the entry area is typically the recommended location; (2) the notices/signage should include a picture of a firearm within a red circle and a diagonal red line across the firearm; and (3) the notices/signage should include a phrase along the lines of “No Firearms Allowed”. If the Association complies with these requirements and someone brings a firearm on the common areas in violation of the prohibition, the individual could potentially be guilty of criminal trespass in violation of A.R.S. §13-1502 or A.R.S. §13-1503.

With that being said, please keep in mind that Arizona has some of the least restrictive gun control laws in the country. Furthermore, case law is always subject to change in regard to constitutional challenges. As such, while we feel that the above method is likely enforceable at this time, it would potentially be subject to challenge.

We would also suggest that this topic be discussed at an open Board meeting where the Board can ask for homeowner input prior to the rule being adopted. This has the possibility to be a controversial rule so it would be smart for the Board to solicit homeowner input so they know if owners would be in favor of this rule. 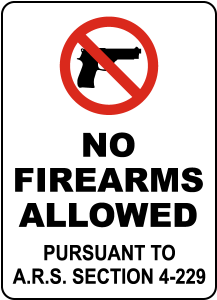